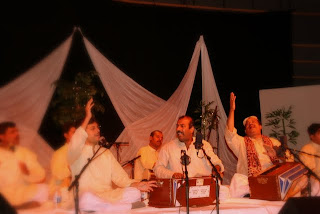 Farid Ayaz & Abu Muhamamd Qawwal Party
This slow and pensive rendition of " Khabar e Tahayyur-e-Ishq Sun" is one of my favorites. A new and eloquent translation has been added here by Saiyed Nizamuddin Ahmad who hails from Lucknow and is presently Assistant Prof of Arabic and Islamic Studies at The American University of Cairo.

[1] Hearken to the tale of Love’s [metaphysical] perplexity:

neither the ardour of madness remained,

neither the angelic beloved remained;

the garment of nakedness;

Neither the stitching of reason remained,

neither the veiling of madness’ ardour remained.

[3] A wind blew from the threshold of the unseen,

and the garden of bliss was consumed.

Yet, but a branch of the tree of sorrow

―known as the heart― green remained.

[4] With which tongue am I to recount the indifference of the beloved?

Desire akin to the wine of a hundred goblets brimmed up

in the vessel of the heart yet, therein remained.

[5] What a marvelous instant it was that I learned of the elixir of Love!

The book of reason placed on the shelf,

on the shelf remained.

[6] The intensity of the perplexity of your beauty,

was so brilliantly revealed, that

neither the mirror’s shine remained,

neither the angelic beloved’s beauty remained.

[7] The fire of love has reduced the mute heart of Siraj to ashes,

My eternal salaam to Nakujabadi, the beautiful spirit. Your brilliance is a treat, again, as always. But only for those who know of it, and keep looking for it. Always known that there was a poet in you.
Majaaz

There is absolute other worldly majesty to this poetry, indeed our beloved prophet Mohammed, may Allah's blessing and peace be upon him said "poetry is lawful magic" and is any wonder that a surah of the Quran kareem is titled As-shurah. Beautiful kalam and a powerful translation, keep it up

Anyone has mp3 of Farid Ayaz qawwalis? I want them!

Typing away my ADHD said...

Many Thanks to the Professor for the translation!